Moreover, thanks to vertical integration initiatives, Omega has enhanced its state-of-the-art validation facility to ensure customers achieve dimensional and aesthetic results on their molded parts. Besides the Oldcastle facility, which employs 220 people, Omega maintains a second facility in Queretaro, Mexico, with 20 team members. The company is ISO 9001:2015 certified. Omega was named 2017 Foundational Principles Supplier of the Year by then FCA US LLC (now Stellantis) and 2019 Supplier of the Year by General Motors Co., and has won several other engineering innovation awards.

Early in 2020, Omega was invited by anautomaker customer to participate in a study comparing conventional P20 against a relatively new P20 grade developed by Chicago-based Finkl Steel. Introduced a few years before, the material was gaining popularity among European moldmakers but hadn’t caught on in North America yet.

The new grade offered a host of interesting properties. However, what most intrigued both OEM and mold builder was the possibility of skipping the stress-relieving step after rough cutting, which could shorten mold production by up to a week. With that in mind, Finkl, Omega, its OEM customer and the molder set out to see if, indeed, that was the case. They recognized that while there was interest in the new material, most companies would be reluctant to spec it without more test data so they could understand its behavior versus conventional P20. “Omega is always looking for continuous improvements and working with suppliers to remain the industry’s global leader and premier solutions provider,” explains Greg DeFrancisco, Omega director of sales, program, management and estimating. “Because of that philosophy, customer wants and needs are always our primary focus. We’re continually looking for ways to make molds more efficiently without sacrificing quality or durability.”

“The key to formulating a good mold steel is uniformity of hardness and microstructure—from surface to center.”

Omega and the OEM decided to compare Finkl’s standard MD steel against the company’s new MD Xtra grade side by side in the cavities of a pair of large (80 x 28 x 20-inch/203 x 71 x 51-centimeter) fascia molds for a 2022 full-size pickup program. They would produce the cores of both molds and the cavity of the primary mold in MD steel while producing the backup/capacity mold’s cavity in MD Xtra. They chose to conduct the comparison on the cavity side since it had all the geometry, most of its steel had been removed and it featured a collapsible core to ensure no parting lines were visible on the A surface of the part after demolding. “The plan was to check hardness, temperature levels and movement of MD versus MD Xtra on two identical tools produced by the same mold builder using the same machines, cutters, operators, programs and settings,” notes DeFrancisco. Since these were costly production tools, program risk would be reduced by stress relieving both steels to Finkl’s recommended settings. However, Omega would scan the deflection on both cavities before and after stress relieving and perform a coordinate measuring machine (CMM) scan using two different technologies after completing the molds. As the final step, both molds were shipped to the Tier 1 molder to shoot actual fascia parts in a high-modulus, 20% talc-filled TPO grade.

Developed for a Different Purpose

Finkl Steel was founded in 1879 and is a leading supplier of steels for plastic molds, die-cast dies, forging dies and custom open-die forgings. Steel for plastic molds is one of Finkl’s most significant product lines. In addition to its flagship plant in Chicago, Finkl also has a fully integrated forging plant in Sorel, Québec, Canada, where 100% of the electricity used is generated from renewable sources. It also maintains a custom forging plant in Detroit and a machining and heat-treat facility in Houston. In 2017, Finkl launched MD Xtra, a low-alloy/low-sulfur grade developed to address limitations of conventional P20 in increasingly large injection molds—particularly fascia blocks. “P20 has served the industry well for most of its existence, but it was optimized—concerning physical properties and cost—around molds whose thicknesses were less than 20 inches [51 centimeters],” explains Ben Ritchey, Finkl technical director. “Although modifications to P20’s basic chemistry have occurred over the years—such as adding nickel to improve hardenability and toughness—the sizes of today’s largest molds have reached a range where you need to move beyond P20 to achieve the ideal properties needed by such big molds.”

Ritchey adds that the key to formulating a good mold steel is uniformity of hardness and microstructure—from surface to center. “Uniform hardness ensures the mold has strength where it’s needed, but it also plays a significant role in polishing uniformity,” he continues, adding that hard and soft materials polish differently, so having a wide variation in hardness across a block requires a polisher to adjust technique or risk creating defects like orange peel or pitting. 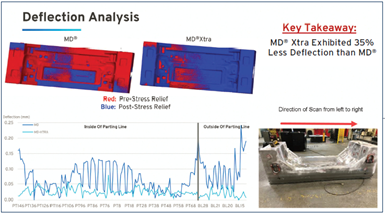 “Microstructural uniformity, in particular minimizing segregation of carbon and alloying elements on the microscopic level, is also key in ensuring uniform polishing, but it’s essential when texturing or graining the mold,” Ritchey continues. “Hence, our prime focus in developing MD Xtra was to ensure uniformity of hardness and microstructure in large cross-section molds. To do this, we focused on reducing the steel’s carbon content, as carbon is a key contributor to microsegregation, although it’s also vital for providing strength. We ultimately achieved this via microalloying additions that ensure both uniformity of high hardness across large cross-sections without being limited by the heat transfer rates to achieve martensite upon quenching in a traditional P20-type steel.”

During development, researchers realized the new material offered several other benefits they hadn’t formulated for: improved thermal conductivity, which can reduce mold cycle times, and a higher possible hardness range (they can achieve a super-hard range of 39-43 HRC in addition to high-hard (HRC 34-38) and regular (HRC 30-34). For super-hard grades, thickness is limited to 32 inches/81 centimeters. Like all super-hard steels, MD Xtra super-hard is more difficult to machine, but this shouldn’t be an obstacle with proper planning and tooling. Ritchey also notes that Finkl expects MD Xtra to offer the same or better long-term durability than conventional MD owing to its more uniform strength and toughness through the cross-section. 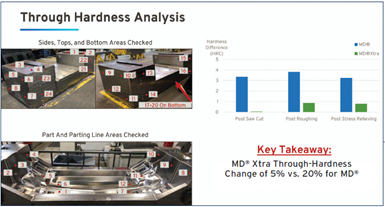 Another takeaway from the study was that the MD cavity showed a 20% change in through-section hardness while the MD Xtra cavity exhibited only a 5% change. Photo Credit: Omega Tool Corp.

Another feature researchers discovered is that MD Xtra naturally has lower residual stresses. “Residual stresses in a hardened steel result from many factors, but the greatest contributor is the hardening process itself,” explains Ritchey. “We achieve higher strength by straining the steel at the atomic level. The question is whether those stresses are balanced and uniform. For a large block of steel like a mold block, it can be particularly challenging to balance stresses using industrial processes. Hence, the industry’s best practice has been to recommend stress-relieving blocks after rough machining to avoid unpredictable movement or distortion.” Simulation results suggested that since MD Xtra offers improved uniformity of hardness, microstructure and stress after hardening, perhaps it also would offer sufficiently high dimensional stability, potentially eliminating the required stress relieving after rough cutting. 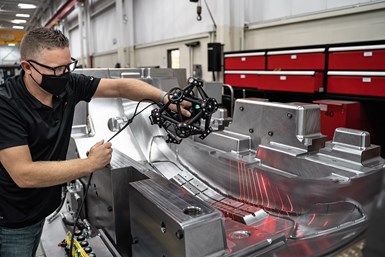 To ensure post-hardening and machining stresses hadn’t caused the MD Xtra cavity to shift dimensions, both it and the benchmark MD cavity were subjected to two CMM techniques. First, both cavities were examined in-house via Creaform laser scanner and then both were sent to a third-party supplier to be probed. Photo Credit: Omega Tool Corp.

The study began in February 2020 and took 24 weeks before the first parts were shot—two weeks longer than usual owing to Omega’s decision to send both cavities out for a second type of CMM scan. “We didn’t just measure them in-house with a Creaform. We also had a third-party supplier probe the cavities to quantify the results,” recalls DeFrancisco. “We also performed additional tests on the blocks before and after stress relieving, which incurred additional time.”

Compared to MD steel, MD Xtra exhibited roughly 35% less movement during deflection analysis. Also, Omega measured a 20% change on MD in through-hardness analysis but only a 5% change in MD Xtra. Not only did the new P20-type material machine slightly faster on the same CNC centers at the same settings, but it required 30-40% fewer cutter inserts to complete the job, representing additional savings. Further, it polished the same as MD steel and when grained using a Benedict (acid etch) process to 0.0036 inch/0.091 millimeter, it provided the same results. Higher thermal conductivity meant that the molder was able to reduce cycle time by two to three seconds on the tool with the MD Xtra cavity when they molded the fascias.

“While we’re not the first company to promote a steel that doesn’t require stress relieving, most approaches to date have increased manufacturing costs,” adds Ritchey. “We were careful from the start to optimize our formulation and modifications to ensure cost was minimally impacted. Although this premium material does sell at a higher cost than conventional P20, the benefits it brings in terms of greater consistency, lower stress, better thermal conductivity, better polishability and the option to skip the stress-relieving step can quickly offset price differences—particularly on the large molds for which we formulated this material. Plus, by eliminating the stress-relieving process itself and transportation to and from the stress-relief facility, we improve the overall carbon footprint of mold steels.”